Gardening in the City 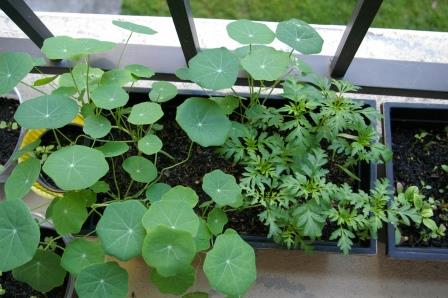 When I was a teenager, my mother asked me to help her in the garden with weeding as part of my contribution to family life. Chores were bad enough, but weeding was about the worst on any Saturday. Chores were a part of being a member of the household and I did my share, unless it was outside crouching around the flowerbeds, dodging worms and insects of all sorts. Not to mention the dirt.

How things change. When I had a place of my own, a garden became a worthy pastime. At that stage, I was most interested in growing vegetables, never mind the dirt and worms. Worms are good and I had no problem picking them up, cherishing  and being grateful for them.

If you have read some of my earlier articles about Pomegranate nurturing, you will have an idea of how I have connected 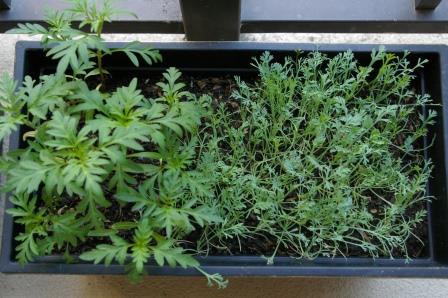 growing plants with my writing, such as the article, Compost. I even connected gardening, children and my writing when I was still able to entice my two eldest to love helping Mommy.

Now I live in an apartment in the city and have left my garden, my pomegranate and compost to the care of others. Two years later, I’m caring for another garden — on a much smaller scale. The inspiration for this garden was as a tribute to many beloved members of my family who are no longer with me.  I have written about some of them here. My father was the subject of an article about learning life lessons, as was my sister-in-law. My mother is a constant feature and undercurrent.

This year, the deaths of my only brother and one of my nephews inspired me to plant a living memorial to all of the people who are gone from my life.

The first photo is of Nasturtiums, in memory of my father. Nasturtiums are for patriotism in honor of my father’s service in the U.S. Army and his bravery in the face of great disappointment and ill-health.  The second photo is of California Golden Poppies, in memory of my mother. Poppies are for nurturing in honor of my mother’s dedication to her children and so many other children for whom she cooked in school kitchens. 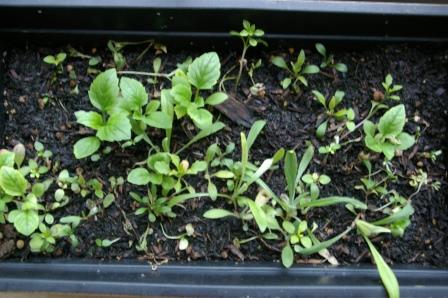 This photo is a mix which is beneficial to hummingbirds – we have a few in our area – in memory of my brother whose heart was broken and his beloved wife who lived with Cerebral Palsy and Parkinson’s Disease without ever asking ‘Why me?’

As you can see, these wild flowers are taking their time to get a good start on life on my balcony. Our weather here is mild but foggy. We had sun on Saturday but not for long.

This photo is a mix which is beneficial to bees – I haven’t seen many this year in the lower western corner of the city – and is in honor of my youngest nephew whose brief life had been full of enthusiasm, wildness, a love of life and too many misunderstandings.  My heart breaks when I think of him, just nine months older than my eldest. 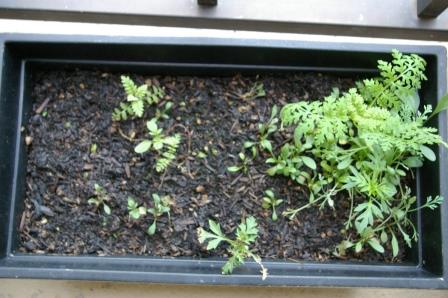 This mix seems to have some very strong contenders and many which are not having any of it. It remains to be seen what the bees will think of it once the flower blossoming begins.

You may have some doubts about my gardening ability when you realize that I started these at the end of August. I showed little knowledge of the cycles of nature, right? That’s true. But as fortune will have it, all of these plants thrive and can be planted in the later part of the year — something I didn’t know when I chose them! Add to that the fact that my city has a unique micro-climate and will be very warm in the coming month of October. 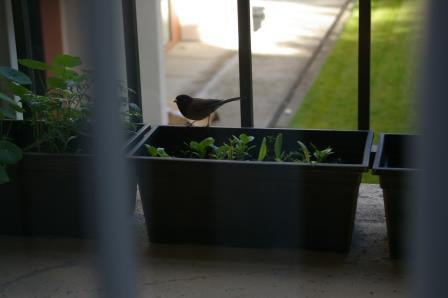 We may not have much of a summer (the coldest winter Mark Twain ever spent was a summer in my town) but it’s likely to be in the 80s until mid November. And if you doubt that, here is one of the many rewards of a garden of whatever size or kind.

This solo visitor made a thorough exploration of each of my planters and found what he was after — the insects that put me off gardening in the first place all those years ago!