This article appeared a few weeks before Wait a Lonely Lifetime, my debut novel, hit the libraries and online booksellers. Amazon Publishing had already purchased Avalon and my career as a published author was already on shaky ground.

The forthcoming publication of my debut novel, Wait a Lonely Lifetime, with Avalon Books calls for some attention to the hero of this book:  U.S. Army officer, Eric E. Wasserman, who doesn’t feel comfortable in civilian clothes.

I admit, when I see a man in uniform, I look twice. I don’t know if this is a genetic anomaly or a primordial instinct but there is something about a human male impeccably dressed, starched, buttoned and tied that unleashes a basic response from me: instant & rarely unjustified trust, a sense of security and protection as well as a recognition of pride and courage. 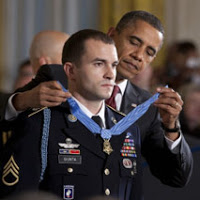 This could be because so many of the most trustworthy, dependable men I have known have been the uniformed kind. This could also be the reason I have made my hero, Eric Wasserman, uncomfortable out of uniform when he first meets the love of his life and why he chooses to wear only military garb when they next meet.

His choice to return to Army life after a brief stint as a civilian has as much to do with the story development as with my own military-philia, having a long, proud history of U.S. Army, Navy and Air Force family members. Eric came to life when I saw him as a gawky, ex-GI out of his element among art college students.

Eric Wasserman is a fictional character who embodies all I can imagine of the best of the male of our species: characteristics I have observed throughout my life; characteristics that are embedded in their genetic coding. My first novel for Avalon is my way of saying thank to people who have been important in my life – both familiar and unknown.Feeling out of our element is something we all share at one time or another. Eric’s second-in-command, Lt. Cleonina Jones, forces him to face his desertion of the only woman he has ever loved, Sylviana Innocenti, and take responsibility for his part in the unhappy outcome.

Re-Post: Something Wicked This Way Comes & Why Writers Could Be in Great Danger