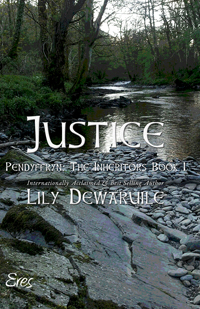 To prepare his daughter, Tanglwys, for a future without his protection, Meinor Hedydd contracts with Gwennan Pendyffryn to take her as an apprentice in the Invader’s Gaer household to learn skills that will be of use to others and a source of income for her. The presence of another dependent fostered child affects Gwennan’s stepson, Marshal deFreveille, in a way that is not entirely unwelcome as he begins his own training to become a soldier in his father’s army.

After the death of her father, Tanglwys is forced to leave the Gaer to help her mother but continues her work with the apothecary to cultivate medicinal herbs that will save other soldiers’ lives.

From the beginning of their acquaintance, Tanglwys and Marshal face hatred and intolerance. A fateful encounter at the river sparks more than his protective inclination toward her, but when Marshal disciplines her brother and his friends for tormenting Tanglwys, their budding friendship falters.  Punishes

Her brother’s resentment and loathing for the Invader’s son are fierce. His violence toward his sister for causing the incident leads to his demotion to the lowest ranks of soldiery. In fear of her brother and her mother’s continuing hatred for the Invader, Tanglwys denies her growing admiration for Marshal but he has another future in mind for them.

Justice is available on Kindle, Nook, and on the iBookstore as well as in paperback.